I would be very interested in hearing your thoughts about this!
Comments are invited and encouraged.

Jambalaya is often associated with the Spanish paella - many authorities on Creole cuisine frequently say so.  But looking at jambalaya and paella one finds them to be very different dishes.  We must remember that cooking was done by enslaved Africans from the western Senegambia region.  While in Louisiana they certainly were taught French techniques, much of their West African heritage lived on to help create the magic of Creole cuisine.

Here is a video shot in Gambia of a woman named Awa making a classic West African dish called Benachin.  In it we find a startling number of similarities between their techniques and ours.  The Africans introduced many things into Louisiana cuisine, but two of the most important were a.) slow cooking and b.) extracting and preserving as much flavor as possible.  Much flavor in European cooking is lost as juices are permitted to turn into steam, rising and dissipating away into the air.  Awa takes great care to create what looks like an amazing broth full of the flavors of the chicken and vegetables, preserved into the broth, in which she boils the rice.  (Among the vegetables she uses are onion and garlic - sound familiar?  All we need is the bell pepper!)

Notice, too, she is cooking over an open fire.  Imagine an enslaved cook preparing dishes over just such fires. (Frequently over an open hearth but just as frequently, on hot days, out in the patio over a fire, precisely as Awa is doing in 21st century Gambia.)  Let me also point out that, even though she is pre-steaming the rice before cooking and we steam after, seeing her place the rice in a colander over the pot is startlingly similar to the way we do it today.

Interesting that she browns the chicken, removes it, sautes the vegetables and then adds water, making a broth and then replaces the chicken to finish the cooking process in the broth.  (Does that ring a bell, Gumbo Makers?)
She also uses (instant) boullion.  Some Creole cooks call that a cardinal sin.  Awa has no problem with it.  I don't either, me.

She also makes a side dish that has mustard but she calls it "moutarde" - French for mustard.  The ingredient she calls "dahar" is tamarind.

She also says she's going to put in some beans.  I looked at other recipes for benachin that do not use beans, so this is apparently a variation that she enjoys.  Obviously, we don't put in beans, but in true jambalaya form, a little of this and a little of that....

...for that's what this is - JAMBALAYA!  It is a precious gift from West Africa. 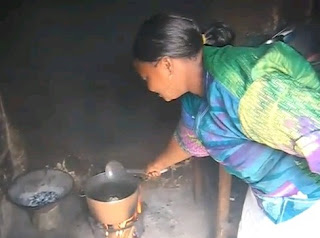