People are often amazed to find that the Bloody Mary cocktail – so popular at New Orleans brunches, lunches, teas, dinners, midnight snacks, parades, kindergarten graduations and funeral services – was not developed here and is not a New Orleans drink.  The origins of the Bloody Mary can be traced to a Parisian bartender (and notorious name dropper) by the name of Fernand Petiot.  He made many claims to have originated the drink, however in the two stories between which he most often vacillated famous names, such as Ernest Hemingway and the “Toastmaster General” George Jessel, found their way into the mix.


In one version of his story, Petiot claimed to have created the drink in the Roaring 20’s at Harry’s New York Bar in Paris where Ernest Hemingway hung out.  A couple of customers from Chicago said the drink reminded them of a waitress back home named Bloody Mary and the drink was so christened. Later, his story changed when he brought George Jessel into the picture.  In 1925 Petiot moved to the United States and he served libations at the King Cole Bar in the St. Regis Hotel from 1934 to 1966.  In 1964 he told The New Yorker “I initiated the Bloody Mary of today…George Jessel said he created it, but it was really nothing but vodka and tomato juice when I took it over.”  In this version, Jessel’s drink was nothing more than equal parts tomato juice and vodka.  Petiot claimed to have taken it further by adding salt, black pepper, cayenne pepper, Worcestershire sauce and lemon juice.  According to Petiot, “We serve a hundred to a hundred and fifty Bloody Marys a day here in the King Cole Room and in the other restaurants and the banquet rooms.”

Whether the drink was created in Paris or New York, it made its way to New Orleans where it slipped right in with its jazzy Creole sass and, certainly, oysters manage to slip down very easily when chased with a Bloody Mary.  Here is my favorite recipe for the mix; it comes from Emeril Lagasse and, while you will notice it contains no cayenne or Tabasco sauce, the Worcestershire sauce gives it just the right kick. 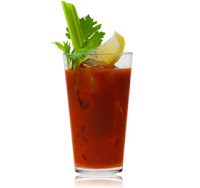 Mix well; chill.  Makes 32 oz. (Double the recipe for a gallon.) Best when made a day or two in advance.  For cocktail, mix 4 parts mix to 1 part vodka.

* I’ve also tried V8 but it doesn’t make enough difference in flavor to warrant substituting it.
Posted by Tour Creole at 6:07 AM